The Danger of False Teaching 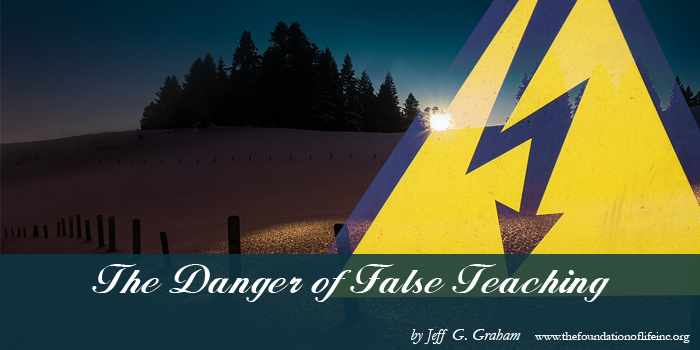 THE DANGER OF FALSE TEACHING

‘Take heed that no one deceives you’   Jesus—Matthew 24:4

God clearly warned from the prophets:  Jeremiah chapters 6 and 23

‘Beware of false prophets, who come to you in sheep’s clothing, but inwardly they are ravenous wolves’  Mt. 7:15

‘For I know this, that after my departure savage wolves will come in among you, not sparing the flock. Also from among yourselves men will rise up, speaking perverse things, to draw away the disciples after themselves. Therefore watch, and remember that for three years I did not cease to warn everyone night and day with tears’  Acts 20: 29-31

‘For a great and effective door has opened to me, and there are many adversaries’   1st Cor. 16:9

‘But I fear, lest somehow, as the serpent deceived Eve by his craftiness, so your minds may be corrupted from the simplicity that is in Christ’     2nd Cor. 11:3

‘For such are false apostles, deceitful workers, transforming themselves into apostles of Christ. And no wonder! For Satan himself transforms himself into an angel of light. Therefore it is no great thing if his ministers also transform themselves into ministers of righteousness, whose end will be according to their works’   2nd Cor. 11: 13-15

‘I marvel that you are turning away so soon from Him who called you in the grace of Christ, to a different gospel, which is not another; but there are some who trouble you and want to pervert the gospel of Christ’   Gal. 1: 6,7

‘And this occurred because of false brethren secretly brought in (who came in by stealth to spy out our liberty which we have in Christ Jesus, that they might bring us into bondage)’   Gal. 2:4

‘O FOOLISH Galatians! Who has bewitched you that you should not obey the truth, before whose eyes Jesus Christ was clearly portrayed among you as crucified?   Gal. 3:1

‘And He Himself gave some to be apostles, some prophets, some evangelists, and some pastors and teachers, for the equipping of the saints for the work of ministry, for the edifying of the body of Christ, till we all come to the unity of the faith and of the knowledge of the Son of God, to a perfect man, to the measure of the stature of the fullness of Christ; that we should no longer be children, tossed to and fro and carried about with every wind of doctrine, by the trickery of men, in the cunning craftiness of deceitful plotting’   Eph. 4: 11-14

‘For we do not wrestle against flesh and blood, but against principalities, against powers, against the rulers of the darkness of this age, against spiritual hosts of wickedness in the heavenly places’   Eph. 6: 12

‘Brethren, join in following my example, and note those who so walk, as you have us for a pattern. For many walk, of whom I have told you often, and now tell you even weeping, that they are the enemies of the cross of Christ: whose end is destruction, whose god is their belly, and whose glory is in their shame-who set their mind on earthly things’   Phil. 3: 17-19

‘For this reason, when I could no longer endure it, I sent to know your faith, lest by some means the tempter had tempted you, and our labor might be in vain’ 1st Thes.  3: 5   [compare with 2nd Cor. 11: 14, 15]  ‘And no wonder! For Satan himself transforms himself into an angel of light. Therefore it is no great thing if his ministers also transform themselves into ministers of righteousness, whose end will be according to their works’

‘Now the Spirit expressly says that in latter times some will depart from the faith, giving heed to deceiving spirits and doctrines of demons’ 1st Timothy 4: 1

‘Be diligent to present yourself approved to God, a worker who does not need to be ashamed, rightly dividing the word of truth’  2nd Timothy 2: 15

‘But know this, that in the last days perilous times will come’ 2nd Timothy 3: 1

‘For the time will come when they will not endure sound doctrine, but according to their own desires, because they have itching ears, they will heap up for themselves teachers; and they will turn their ears away from the truth, and be turned aside to fables’  2nd Timothy 4: 3, 4

‘But the end of all things is at hand; therefore be serious and watchful in your prayers’   1st Peter 4: 7

‘Be sober, be vigilant; because your adversary the devil walks about like a roaring lion, seeking whom he may devour’ (this also he seeks to do through doctrines of demons, see 1st Tim. 4: 1) 1st Peter 5: 8

‘But there were also false prophets among the people, even as there will be false teachers among you, who will secretly bring in destructive heresies, even denying the Lord who bought them, and bring on themselves swift destruction. And many will follow their destructive ways, because of whom the way of truth will be blasphemed. They have forsaken the right way and gone astray, following the way of Balaam the son of Boar, who loved the wages of unrighteousness’   2nd Peter 2: 1, 2, 15

‘And consider that the longsuffering of our Lord is salvation—as also our beloved brother Paul, according to the wisdom given to him, has written to you, as also in all his epistles, speaking in them of these things, in which are some things hard to understand, which untaught and unstable people twist to their own destruction, as they do also the rest of the Scriptures. You therefore, beloved, since you know this beforehand, beware lest you also fall from your own steadfastness, being led away with the error of the wicked; but grow in the grace and knowledge of our Lord and Savior Jesus Christ’   2nd Peter 3: 16, 17 18

‘Little children, it is the last hour; and as you have heard that the Antichrist is coming, even now many antichrists have come, by which we know that it is the last hour. They went out from us, but they were not of us; for if they had been of us, they would have continued with us; but they went out that they might be manifest, that none of them were of us’   1st John 2: 18, 19

‘Beloved, do not believe every spirit, but test the spirits, whether they are of God; because many false prophets have gone out into the world’   1st John 4: 1

‘For many deceivers have gone out into the world who do not confess Jesus Christ as coming in the flesh. This is a deceiver and an antichrist. Whoever transgresses and does not abide in the doctrine of Christ does not have God. He who abides in the doctrine of Christ has both the Father and the Son. If anyone comes to you and does not bring this doctrine, do not receive him into your house nor greet him; for he who greets him shares in his evil deeds’   2nd John 7, 9-11

‘Beloved, while I was very diligent to write to you concerning our common salvation, I found it necessary to write to you exhorting you to contend earnestly for the faith which was once for all delivered to the saints. For certain men have crept in unnoticed, who long ago were marked out for this condemnation, ungodly men, who turn the grace of our God into lewdness and deny the only Lord God and our Lord Jesus Christ’    Jude 3, 4

‘They told you that there would be mockers in the last time who would walk according to their own ungodly lusts. These are sensual persons, who cause divisions, not having the Spirit’   Jude 18, 19

ALL SCRIPTURE IS TAKEN FROM THE HOLY BIBLE NEW KING JAMES VERSION, COPYRIGHT 1982 By THOMAS NELSON.