The Bible ~ The Powerful Word of God 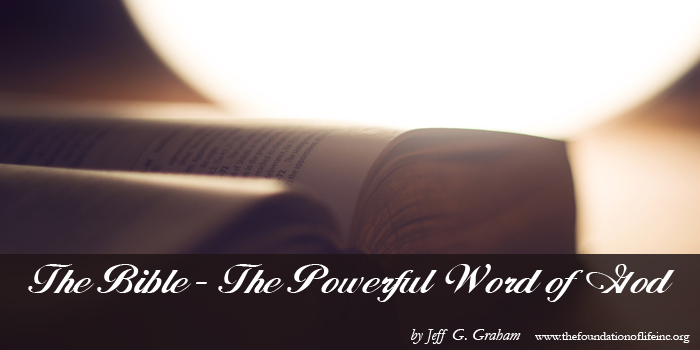 In my humblest effort to exalt the Bible as the true Word of God, I start with the King James translators; ‘But among all our joys, there was no one that more filled our hearts, than the blessed continuance of the preaching of God’s sacred Word among us; which is that inestimable treasure, which excelleth all the riches of the earth; because the fruit thereof extendeth itself, not only to the time spent in this transitory world, but directeth and disposeth men unto that eternal happiness which is above in heaven’. The Bible is alive and powerful unlike anything throughout the ages of mankind, people have tried to destroy it, write it off as myth, deny the obvious fulfillment of its prophecies, and have tried to disclaim it; but all to no avail! The Bible is the ONLY reliable source that tells where man came from, why he is here and where he is going. The Bible ALONE tells us the truth about man (that he is a sinner by nature and by his choice), and why he is estranged from his Maker. The Bible ALONE is Gods revelation of Himself to mankind; thus the ONLY place we find the truth regarding who God is and what He is like I.E.
His character. The Bible tells us plainly that God is the creator of all things, and that evolution is a farce: ‘In the beginning God created the heaven and the earth. So God created man in His own image, in the image of God He created him; male and female He created them’ (Genesis 1:1, 27).

The Bible is first and foremost a declaration of God Himself; it is NOT about philosophy in regards to God, or who He is. This being understood will clarify our goal of declaring the Bible as the sole Word of the living God! The Bible was written over a period of 1400 to 1600 years, by about 40 to 44 different authors all with the same declaration of the same Creator God running through its 66 books; that make up the complete revelation of the one true God. The major theme that runs from Genesis through Revelation is: ‘man’s complete ruin in sin, Gods perfect remedy in Christ’. The Bible declares that God is love (1 st John 4:8), and in love Gods nature is to give; ‘For God so loved the world that He gave His only begotten Son, that whoever believes in Him should not parish but have everlasting life’ (John 3:16, Gods declaration to fallen mankind). This is not religion, but a relationship which God initiated not man! God wants to be known and  understood in and through His Word: ‘But let him who glories glory in this, that he understands and knows Me, that I am the Lord, exercising lovingkindness, judgment, and righteousness in the earth. For in these I delight, says the Lord’ (Jeremiah 9:24). This is a personal God that wants to be known through relationship, which we find in the Bible ALONE. I want to take a moment to speak to those who hide behind the argument of religion; the definition of religion is: ‘any specific system of belief, worship, conduct, ect. Often involving a code of ethics and a philosophy’ [Webster’s new world dictionary]; this is NOT what the Bible is about! God declares Himself in His Word to be gracious, full of compassion, slow to anger and great in mercy (Psalm 145:8). Does this sound like religion? It is through the pages of the Bible that we can come to know God; ‘Come now, and let us reason together, says the Lord’ (Isaiah 1:18).

The Bible declares that God is separate from His creation, yet totally involved with it. We know this because; ‘In the beginning God created the heavens and the earth’ (Genesis 1:1), no philosophy here; just plain fact! All living things were created NOT evolved, that makes us accountable to our Creator! The Bible today is under attack perhaps like no other time in history. Man in all his ‘wisdom’ will tear the Bible apart, trying to prove it a myth, discrediting it to ‘his satisfaction’; yet all the while being in complete ignorance of its real contents. While we can and should look at creation and realize that an intelligent Creator is behind all this magnificence; but only the Bible tells us of His wonderful character and who He is. For those who question the Bible and its validity, we will demonstrate that God clearly shows the world that the Bible is His Word by fulfilling it in prophesy; ‘Behold, the former things have come to pass, and new things I declare; before they spring forth I tell you of them’, ‘Remember the former things of old, for I am God, and there is no other; I am God, and there is none like Me, declaring the end from the beginning, and from ancient times things that are not yet done, saying, My counsel shall stand, and I will do all My pleasure’ (Isaiah 42:9, 46:9,10). We will start our look at some of the fulfilled prophesy, by looking at Israel. It is an undeniable fact that Israel
and its people the Jews, find their history thousands of years ago, and have kept their ethic race and identity just as the Bible said they would; and all of this after having been scattered to all parts of the globe just as God said they would (Deuteronomy 28:64,65). God has stated that He would bring them back to their own land in the last days (Jeremiah 23:8, Ezekiel 20:34,41,42, 34:12-14, 36:24, 37:21), this He has done and is continuing to do as this is written. God also said that the nation of Israel would be born in one day (Isaiah 66:8), and on May 14 th 1948 Israel became a nation; unheard of in the course of history! Israel is found in the Bible more than 2450 times, and is the major witness in these days of the absolute validity of the Bible as Gods Word. All of this is even more astounding when we realize that God promised this land to Abraham over 3500 years ago (Genesis 12:7, 13:15, 15:18, 17:8).

Jesus of Nazareth is a fact of history, and as the promised Messiah He fulfilled hundreds of prophesies from His birth to His resurrection, the chances of this happening to any other man is nonexistent!! The Messiah was to be born in Bethlehem (Micah 5:2), He was to be born of a virgin (Isaiah 7:14), The Messiah would ride into Jerusalem as King on a donkey (Zechariah 9:9), He would be betrayed for 30 pieces of silver (Zechariah 11:12), The prophet Daniel prophesied that the Messiah would present Himself as Israel’s King to the exact day (Daniel 9:25, the command to rebuild Jerusalem was March 14 th 445BC [Nehemiah 2:5-18] adding 69 weeks of years, with the Jewish calendar at 360 days a year = 173,880 days, exactly when Jesus rode on a donkey up to Jerusalem to be hailed as Israel’s King). On April 6 th , 32AD, the Lord Jesus was presented as that King! The Messiah was to be crucified by having His hands and feet pierced through (Psalm 22:16—this is an astounding prophesy, since at the time of its writing, crucifixion was not even invented yet). The list goes on and on, Jesus Himself said that the things written in the Law of Moses, the Prophets, and the Psalms were all written concerning
Him (Luke 24:44). In the dawn of history God promised to put an end to the tragedy of sin and death (Genesis 3:15); thus starts the line of prophesies that lead to the Messiah—the Lord Jesus Christ.

We come to the point now in our look at the Bible that we must conclude that the evidence itself points to the supernatural origin and power of the scriptures as the Word of the living God! Time would fail us to list the countless lives; including my own, that have been radically changed through its pages. I conclude this article with a testimony of my own life: ‘A man gave a Bible one day to a friend of his and as time went on his friend would reply to him, that he just could not understand or get into the ‘book’. This went on for a while until the man asked his friend if he would like to meet the author. The author was met, the friend’s life was changed, and the Bible became the dearest thing he owned’! ‘For the word of God is living and active and sharper than any two-edged sword, and piercing as far as the division of soul and spirit, of both joints and marrow, and able to judge the thought and intentions of the heart. And there is no creature hidden from His sight, but all things are open and laid bare to the eyes of Him with whom we have to do’ (Hebrews 4:12,13).

The wonderful road to salvation: A. ‘For all have sinned and fall short of the glory of God’ (Romans 3:23) B. ‘But God demonstrates His own love toward us, in that while we were still sinners, Christ died for us’ (Romans 5:8) C. ‘For the wages of sin is death, but the gift of God is eternal life in Christ Jesus our Lord’ (Romans 6:23) D. ‘If you confess with your mouth the Lord Jesus and believe in your heart that God has raised Him from the dead, you will be saved. For with the heart one believes unto righteousness, and with the mouth confession is made unto salvation’ (Romans 10:9,10)