The Battle for The Bible Rages On 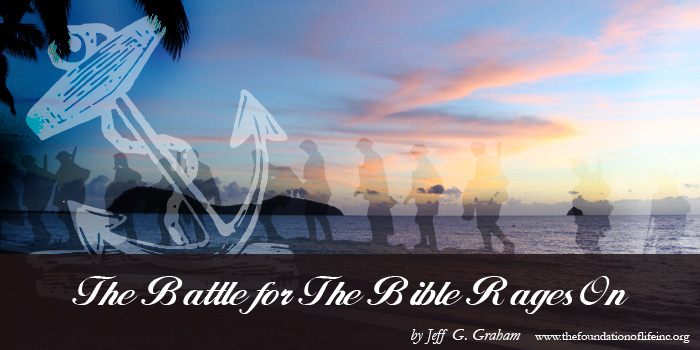 Spiritual deception is the first deception known to man; ‘Yea, hath God said’ (Genesis 3:1). Mankind has been at war with God and His Word ever since!  In this article, we will show that Gods Word–the Bible is the Eternal Word of the living God; and as such we can prove it’s trustworthiness, and it’s infallibility: ‘The entirety of Your word is truth’ (Psalms 119:160 NKJV).  What rational men really desire to know about God is His character, what is He like, can I trust Him, how can I know beyond a shadow of a doubt that the Bible is His word and can I trust it with my life!  If I am to know anything about God, it must start with the Bible; because it claims to be the Word of the living God, “The grass withereth, the flower fadeth: but the word of our God shall stand for ever” (Isaiah 40:8).  When we look at the reasons for the Bible’s existence, we can clearly see that it is God’s revelation of Himself to us. God in all His mercy and kindness declares that man is broken in sin (a fact that would not be declared if the Bible is from man), the Bible shows the need of a Savior, (again man in all his pride would not declare this, if the Bible is from man), this is just logical reasoning!

The Bible has been for thousands of years the moral compass and source of comfort and stability for individuals of all races and nationality’s. As we have stated in earlier works; fulfilled prophecy is proof of the validity of the Bible as being the Word of the living God. This perfect creator God has in His perfect Word revealed things that only He could know since He has no beginning and no end.  ‘Behold, the former things have come to pass’ and new things I declare: before they spring forth I tell you of them’ (Isaiah 42:9 NKJV). Prophesy is unique and only found in the Bible, its fulfillment is utterly fascinating! The empires of BABYLON, the MEDO-PERSIA empire, and the ROMAN empire all had their fall just as the Bible had predicted (please see Daniel chapters 2, 5 and 7). Just the prophesy’s regarding the first coming of Jesus Christ alone would fill volumes. We know from well documented history that Jesus lived, died on a cross in fulfillment of prophecy I.E. Psalm 22 (a fact that defies all human reasoning, since at the time of these prophesy’s crucifixion had not yet been invented). Time would fail us to recount all of the prophesies concerning the nation of Israel; literally hundreds that have been fulfilled very precisely, it staggers the mind. God had promised to bring the Jews back in the land of Israel, this has happened precisely as God said it would. In May 14th 1948; Israel became a nation and since then the Jews have been returning to their home land in astounding numbers!

I want to talk a little bit about the testimonies of two people that have had great influence in this world: William Ramsey (1851-1939), was raised an Atheist which later became a great archeologist who set out to prove the Bible false. He spent 15 years ‘digging’ through Asia Minor using the book of Acts in the Bible. At the end of all his labor, he put down his spade and became a committed follower of Jesus Christ; he could not deny the absolute accuracy and trustworthiness of the Bible.  Simon Greenleaf (1783-1853), is still considered today as one of the definitive authorities on legal evidences in the world. Greenleaf himself states: “in trials of fact, by oral testimony, the proper inquiry is not whether it is possible that the testimony may be false, but whether there is sufficient probability that it is true”. Greenleaf concluded that there is more evidence for the death and resurrection of Jesus Christ than justice demands. I would highly recommend his book: ‘The Testimony of the Evangelists-Examined by the rules of Evidence administered in courts of Justice’.

Let me begin this section of our discussion with this scripture: ‘For the word of God is living and powerful, and sharper than any two-edged sword, piercing even to the division of soul and spirit, and of joints and marrow, and is a discerner of the thoughts and intents of the heart’ (Hebrews 4:12). The Bible is the only book that foretells history and its fulfillment with pin point accuracy, describes mans origin and makeup with stunning candidness and truth. The Bible is the anchor of truth, hope, and redemption to the lost and hopeless, it is the logical reasoning for Creation, as we have documented in past works. The Bible has always defended itself as infallible and without error: ‘the entirety of Your word is truth’ (Psalm 119:160). Liston; this life is very brief, it is described as a mist, a shadow, a mere breath, as soon being cut off and we fly away—then comes eternity: ‘Forever, OLord, Your word is settled in heaven’ (Psalm119,89)!   The Lord Jesus said: ‘If anyone thirsts, let him come to Me and drink. He who believes in Me, as the Scripture has said, out of his heart will flow rivers of living water’ (John 7:37, 38).

I appeal to you my readers, 37 years ago (1983), my life was changed. The word of God took a hold of my life, and I have never been the same. I know my Creator, the One who fashioned me in my mother’s womb (Psalm 139:13, 14). Because of Jesus Christ the ‘living word’ I know where I came from, why I am here and where I am going. I now know that my sins have been forever forgiven by His shed blood for me on the cross (Ephesians 1:7). The Bible (Gods word to me) is His word of assurance that I may know that I will live forever in His presence: ‘These things I have written to you who believe in the name of the Son of God, that you may know that you have eternal life’ (1st John 5:13). I promise you this my friends; if you really desire to know the reality of God and His word, and truly seek Him; He will reveal Himself to you—‘The Lord is near to all who call upon Him, to all who call upon Him in truth’ (Psalm 145:18). Spiritual truth can only be found in the Bible. The Lord Jesus said: ‘And this is eternal life, that they may know You, the only true God, and Jesus Christ whom You have sent. Sanctify them by your truth. Your word is truth’ (John 17:3, 17).  ‘Moreover, brethren, I declare to you the gospel which I preached to you, which also you received and in which you stand, by which also you are saved, if you hold fast that word which I preached to you—unless you believed in vain. For I delivered to you first of all that which I also received: that Christ died for our sins according to the Scriptures, and that He was buried, and that He rose again the third day according to the Scriptures’ (1st Corinthians 15:1-4). My friends, God is eternal and His word is Eternal!

Scripture is taken from the New King James Version