THE NIGHT IS FAR SPENT, THE DAY IS AT HAND 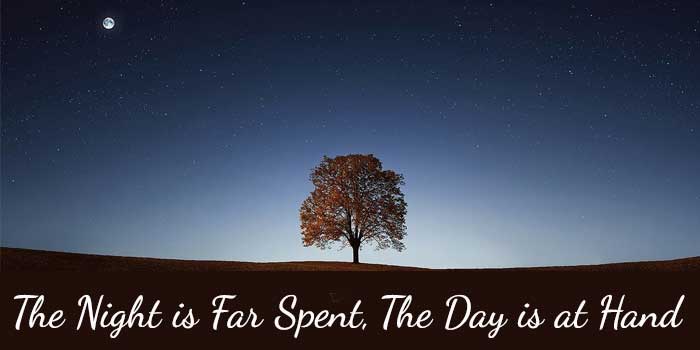 When we look at the world in which we live, we can see a steady downward spirel in morality, ethically, and especially spiritually. The day is fast approaching when the God of the universe (who Himself is holy, pure and rightous) will judge this world for all of its corruption and wickedness. We have fast learned as a society to call ‘good evil and evil good’ with no thought of the consequences (Isaiah 5:20). The ancient world as well as fairly recent history viewed murder as a heinous crime, but in these last days this world sees the killing of unborn children as a choice to be made, with no seeming remorse for this unthinkable evil!  In the beginning God made them male and female (Genesis 1:27), man was made for women, and women for man. God had said to them: ‘be fruitful, and multiply’ (Genesis 1:28), this cannot happen with the explosion of homosexuality! This country alone spends billions a year on pornography with all the corruption and exploitation of women; with countless of lives and marriages being ruined. We have seen the increase of ‘the love of violence’ called sport, every kind of fighting imaginable for sport, has exploded in the last decade!  The Lord Jesus Christ said that just before His return the world would be like the days of Noah, and the days of Lot (Luke 17: 26-30).  The days of Noah were charactorized by the wicked imagination of man continually, and VIOLENCE (Genesis 6:5,11).  In the days of Lot there was anarchy and blatant homosexuality, with all kinds of sexual immorality and perversion (Genesis 19: 1-10). This is exactly what we see in the world today, and it is promoted as good!

Man has taken this precious life that God has given him, and thumbed their noses at Him and taken that life and lived it for themselves with no regard for God who gave it!  Man has put himself in a very serious position: ‘And there is no creature hidden from His sight, but all things are naked and open to the eyes of Him to whom we must give account’ (Hebrews 4:13).  For thousands of years man has questioned the existence of God; but the Bible says that God has shown Himself:  ‘because what may be known of God is manifest in them, for God has shown it to them. For since the creation of the world His invisible attributes are clearly seen, being understood by the things that are made, even His eternal power and Godhead, so that they are without excuse, professing to be wise, they became fools’ (Romans 1: 19,20,22).  God has ultimately showed Himself to the world in the person of Jesus Christ! You see that God became a man; God who is spirit (John 4:24), showed Himself to the world by becoming a man in Jesus Christ. Jesus is His earthly name; while Christ is His title as Messiah; the Savior of the world. The Bible tells us that the Savior is God (Isaiah 43:10, 11); so Jesus Christ is God in human flesh!

The Bible gives proof that it is the Word of God, and that Jesus Christ is who He claims to be; by fulfilled prophecy, the Bible leaves no room for doubt.  The Messiah (Christ) had to be born in Bethlehem (Micah 5:2), and so He was. I will set forth five amazing fullfilled prophesy’s in Jesus Christ that must not be ignored: 1) Christ had to be born of a virgin- ‘Therefore the Lord Himself will give you a sign: behold, the virgin shall conceive and bear a Son, and shall call His name Immanuel’ (Isaiah 7:14)–thus fulfilled– ‘And behold, you will conceive in your womb and bring forth a Son, and shall call His name Jesus. Then Mary said to the angel, “how can this be, since I do not know a man?” And the angel answered and said to her, “the Holy Spirit will come upon you, and the power of the Highest will overshadow you; therefore, also, that Holy One who is to be born will be called the Son of God’ (Luke 1:31, 34,35). 2) Christ died by crucifixion- ‘My God, My God, why have You forsaken Me? They pierced My hands and My feet’ (Psalm 23: 1,16)–“this prophesy of crucifixion was given hundreds of years before crucifixion was even invented”– Thus fulfilled- ‘Then they crucified Him, and about the ninth hour Jesus cried out with a loud voice, saying, “Eli, Eli, Lama sabachthani? that is, “My God, My God, why have you forsaken Me? (Matthew 27: 35, 46).  3) Not one of Christ’s bones were broken–“it was custom after prolonged suffering by crucifixion, to brake the legs of the victim to hasten death”. ‘He guards all His bones; not one of them is broken’ (Psalm 34:20)–thus fulfilled– ‘But when they came to Jesus and saw that He was already dead, they did not break His legs. For these things were done that the scripture should be fulfilled, “not one of His bones shall be broken’ (John 19: 33, 36).  4) While Christ was on the cross the soldiers cast lots for His clothing- ‘They divide My garments amoung them, and for My clothing they cast lots’ (Psalm 22: 18)–thus fulfilled– ‘Then they crucified Him, and divided His garments, casting lots, that it might be fulfilled which was spoken by the prophet: “they divided My garments amoung them. And for My clothing they cast lots”‘ (Matthew 27: 35).  5) Jesus Christ rose from the dead- ‘For I know that my Redeemer lives, and He shall stand at last on the earth. For You will not leave My soul in Sheol, nor will you allow Your Holy One to see corruption (Job 19:25, Psalm 16:10)–thus fulfilled– ‘Why do you seek the living among the dead? He is not here, but is risen! This Jesus God has raised up, of which we are all witnesses. God has fulfilled this for us their children, in that he has raised up Jesus. As it is also written in the second Psalm: ‘You are My Son, today I have begotten You.’ And that He raised Him from the dead, no more to return to corruption, He has spoken thus: ‘I will give you the sure mercies of David’. “Therefore He also says in another Psalm: ‘You will not allow Your Holy One to see corruption’ (Luke 24: 5,6 Acts 2: 32; 13:33-35).

All of us have a very serious decision to make; Jesus Christ said in John 14:6: ‘I am the way the truth and the life, and no one comes to the Father except through Me’.  He is either a diluted maniac, a deliberate liar, or He is who He claims to be; the Savior of all mankind!  The human conscience points to a wonderful Creator; enabling us to know right from wrong, and convicting us when we go against this knowledge. The ‘atheist’ knows that he has to forcibly keep God out of his conscience; or he will no longer be an atheist! The Bible says: ‘The fool hath said in his heart, there is no God’ (Psalm 14:1). ‘Because what may be known of God is manifest in them, for God has shown it to them’ (Romans 1:19). This present age is winding down, and the day of accountability is approaching. We must look at our own heart and honestly acknowledge that we are sinners by nature and choice; ‘The heart is deceitful above all things, and desperately wicked; who can know it?’ (Jeremiah 17:9). Do we really think that at the end of our lives we can stand before a holy God, and  escape His judgment? God must judge sin; His justice and rightousness demand this.

We now come to the  greatest news of all time, love so amazing that reaches into eternity–‘For God so loved the world that He gave His only begotten Son, that whoever believes in Him should not perish but have everlasting life’ (John 3:16). The fact that we are created, means we are ultimately accountable to our Creator! The three greatest words in the universe are: ‘God is love’ (1st John 4:8, 16). He sent His Son the Lord Jesus Christ to pay the penalty [by dying in our place] for our sins; that His rightous justice demands! Three days later Jesus was raised from the dead as proof that God was pleased with Christ dying in our place, and He offers forgivness of sins as a free gift: ‘Believe on the Lord Jesus Christ, and you will be saved’ (Acts 16:31). What love is this:  ‘for all have sinned and fall short of the glory of God. But God demonstrates His own love toward us, in that while we were still sinners, Christ died for us. For the wages of sin is death, but the gift of God is eternal life in Christ Jesus our Lord. That if you confess with your mouth the Lord Jesus and believe in your heart that God has raised Him from the dead, you will be saved’ (Romans 3:23, 5:8, 6:23, 10:9).

This precious life that we have is so very brief, before we are even aware of it the sun is setting on this life of ours; the writter of the 39th Psalm put it this way: ‘Certainly every man at his best state is but vapor’ (vrs. 5).  James in the New Testament stated it this way: ‘For what is your life? It is even a vapor that appears for a little time and then vanishes away’ (James 4:14). There is still time for you to make that decision to recieve God’s gift of forgivness and eternal life in Jesus Christ: ‘And this is the testimony: that God has given us eternal life, and this life is in His Son. He who has the Son has life; he who does not have the Son of God does not have life’ (1st John 5:11, 12). Please don’t put this off, this is the most important decision you will ever make; your eternal destiny depends on it!